OKLAHOMA CITY, May 7, 2014 – Chesapeake Energy Corporation (NYSE:CHK) today reported financial and operational results for the 2014 first quarter. Key information related to f the first quarter and the company's full-year 2014 Outlook is as follows:

Doug Lawler, Chesapeake’s Chief Executive Officer, commented, "This was an important and defining quarter for Chesapeake, as our competitive capital allocation, cost leadership and capital efficiency initiatives are driving tangible improvements in the company's growth profile and financial performance. We are raising our 2014 total production growth outlook on an adjusted basis to 9 – 12% to reflect higher-than-expected natural gas liquids volumes. Additionally, we are raising the midpoint of our 2014 operating cash flow outlook by $700 million, or 13%, due primarily to our increased production outlook, better-than-expected first quarter cash flow and an increase in our benchmark commodity price assumptions for the full year."

Chesapeake’s daily production for the 2014 first quarter averaged 675,200 barrels of oil equivalent (boe), a year-over-year increase of 11%, adjusted for asset sales. Average daily production consisted of approximately 109,500 barrels (bbls) of oil, 84,200 bbls of NGL and 2.9 billion cubic feet (bcf) of natural gas. Chesapeake estimates that weather-related downtime adversely impacted its production during the 2014 first quarter by approximately 7,600 boe per day, predominantly in the Mid-Continent region. This production loss was within the range of Chesapeake's budgeted winter weather downtime, which was previously accounted for in the company's 2014 Outlook issued on February 6, 2014.

Chesapeake continues to pursue opportunities to high-grade its portfolio to focus on assets that best fit its strategy of profitable growth from captured resources. The company believes its targeted asset dispositions will be value-accretive and enable it to further reduce financial complexity and lower overall leverage.

During the 2014 first quarter the company received total proceeds of approximately $520 million from asset sales, including $209 million of net proceeds from the sale of its common equity ownership interest in Chaparral Energy, Inc.; $159 million from the sale of compression units to Access Midstream Partners, L.P. (NYSE:ACMP); and $152 million of net proceeds from the sale of real estate and other noncore assets. Additionally, Chesapeake received $362 million in April upon the closing of the previously announced sale of compression assets to Exterran Partners, L.P. (NASDAQ:EXLP). Along with proceeds from other miscellaneous asset sales, this brings year-to-date asset sale proceeds to more than $925 million. Chesapeake will provide an update on additional projected asset sales for the remainder of the year in conjunction with its Analyst Day on May 16.

On February 24, 2014, Chesapeake announced that it is pursuing strategic alternatives for its oilfield services division, Chesapeake Oilfield Services (COS), including a potential spin-off to Chesapeake shareholders or an outright sale. The company continues to evaluate both alternatives and will provide an update upon final determination of the path forward. Potential proceeds or dividend to Chesapeake upon the sale or spin-off of COS would be incremental to the anticipated asset sales detailed above.

A complete summary of the company’s guidance for 2014 is provided in the Outlook dated May 7, 2014 attached to this release as Schedule "A” beginning on Page 15.

The company continues to achieve strong operational results and well-cost reductions in each of its most active plays.

Eagle Ford Shale (South Texas):Eagle Ford net production averaged approximately 88,000 boe per day (187,000 gross operated boe per day) during the 2014 first quarter. Adjusted for 2013 asset sales, this represents an increase of 26% year over year and 1% sequentially. First quarter production was adversely impacted by temporary downtime at gas gathering and processing facilities, operated and competitor offset activity-related shut-ins and weather-related activity reductions. These issues have moderated during April and May, and the company is projecting a higher sequential quarterly growth trajectory for Eagle Ford production during the remainder of the year. Approximately 64% of the company’s Eagle Ford production in the 2014 first quarter was oil, 15% was NGL and 21% was natural gas.

As of March 31, 2014, Chesapeake had 945 producing wells and 114 wells awaiting pipeline connection or in various stages of completion in the Eagle Ford.

As of March 31, 2014, the company had 42 wells awaiting pipeline connection or in various stages of completion in the Mid-Continent.

Utica Shale (Ohio, Pennsylvania, West Virginia): Utica net production averaged approximately 50,000 boe per day (90,000 gross operated boe per day) during the 2014 first quarter, an increase of 422% year over year and 59% sequentially from the 2013 fourth quarter. Approximately 10% of the company’s Utica production during the 2014 first quarter was oil, 30% was NGL and 60% was natural gas.

As of March 31, 2014, Chesapeake had drilled a total of 485 wells in the Utica, which included 274 producing wells and 211 wells awaiting pipeline connection or in various stages of completion.

Haynesville Shale (Northwest Louisiana, East Texas): Chesapeake’s 2014 first quarter average net production in the Haynesville was approximately 495 million cubic feet of natural gas equivalent (mmcfe) per day (780 gross operated mmcfe per day). Adjusted for 2013 asset sales, this represents a decrease of 41% year over year and 8% sequentially. Based on the company's current drilling program, net Haynesville production is expected to return to sequential growth in the 2014 third quarter. All of the company's production in the Haynesville consists of natural gas.

As of March 31, 2014, Chesapeake had 14 wells awaiting pipeline connection or in various stages of completion in the Haynesville.

As of March 31, 2014, Chesapeake had 110 wells awaiting pipeline connection or in various stages of completion in the northern Marcellus.

The table below summarizes Chesapeake’s key financial and operational results during the 2014 first quarter and compares them to results in prior periods. 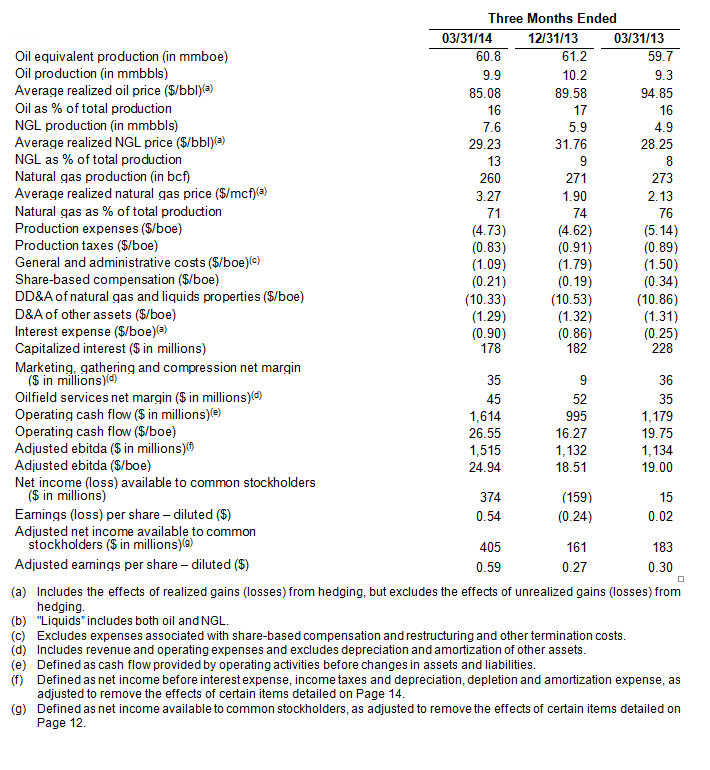 Chesapeake Energy Corporation (NYSE:CHK) is the second-largest producer of natural gas and the 11th largest producer of oil and natural gas liquids in the U.S. Headquartered in Oklahoma City, the company's operations are focused on discovering and developing its large and geographically diverse resource base of unconventional natural gas and oil assets onshore in the U.S. The company also owns substantial marketing, compression and oilfield services businesses. Further information is available at www.chk.com where Chesapeake routinely posts announcements, updates, events, investor information, presentations and news releases.

This news release and the accompanying Outlook include "forward-looking statements” within the meaning of Section 27A of the Securities Act of 1933 and Section 21E of the Securities Exchange Act of 1934. Forward-looking statements are statements other than statements of historical fact that give our current expectations or forecasts of future events. They include production forecasts, estimates of operating costs, planned development drilling, expected capital expenditures, expected efficiency gains, anticipated asset sales and proceeds to be received therefrom, projected cash flow and liquidity, business strategy and other plans and objectives for future operations. Although we believe the expectations and forecasts reflected in the forward-looking statements are reasonable, we can give no assurance they will prove to have been correct. They can be affected by inaccurate assumptions or by known or unknown risks and uncertainties.

Factors that could cause actual results to differ materially from expected results include those described under "Risk Factors” in Item 1A of our 2013 annual report on Form 10-K filed with the U.S. Securities and Exchange Commission on February 27, 2014. These risk factors include the volatility of natural gas, oil and NGL prices; the limitations our level of indebtedness may have on our financial flexibility; declines in the prices of natural gas and oil potentially resulting in a write-down of our asset carrying values; the availability of capital on an economic basis, including through planned asset sales, to fund reserve replacement costs; our ability to replace reserves and sustain production; uncertainties inherent in estimating quantities of natural gas, oil and NGL reserves and projecting future rates of production and the amount and timing of development expenditures; our ability to generate profits or achieve targeted results in drilling and well operations; leasehold terms expiring before production can be established; hedging activities resulting in lower prices realized on natural gas, oil and NGL sales; the need to secure hedging liabilities and the inability of hedging counterparties to satisfy their obligations; drilling and operating risks, including potential environmental liabilities; legislative and regulatory changes adversely affecting our industry and our business, including initiatives related to hydraulic fracturing, air emissions and endangered species; a deterioration in general economic, business or industry conditions having a material adverse effect on our results of operations, liquidity and financial condition; oilfield services shortages, gathering system and transportation capacity constraints and various transportation interruptions that could adversely affect our revenues and cash flow; adverse developments and losses in connection with pending or future litigation and regulatory investigations; cyber attacks adversely impacting our operations; and an interruption at our headquarters that adversely affects our business.

In addition, disclosures concerning the estimated contribution of derivative contracts to our future results of operations are based upon market information as of a specific date. These market prices are subject to significant volatility. Our production forecasts are also dependent upon many assumptions, including estimates of production decline rates from existing wells and the outcome of future drilling activity. Further, the timing of and amount of proceeds from future asset sales, which are subject to changes in market conditions and other factors beyond our control, will affect our ability to further reduce financial leverage and complexity. Any separation of COS is subject to satisfaction of several conditions, some of which are beyond our control, including market conditions, board approvals, consents, regulatory review and approvals, among others. There can be no assurance that the proposed separation will lead to a sale or spin-off or any other transaction, or that if any transaction is pursued, it will be consummated. We caution you not to place undue reliance on our forward-looking statements, which speak only as of the date of this news release, and we undertake no obligation to update any of the information provided in this release or the accompanying Outlook, except as required by applicable law. 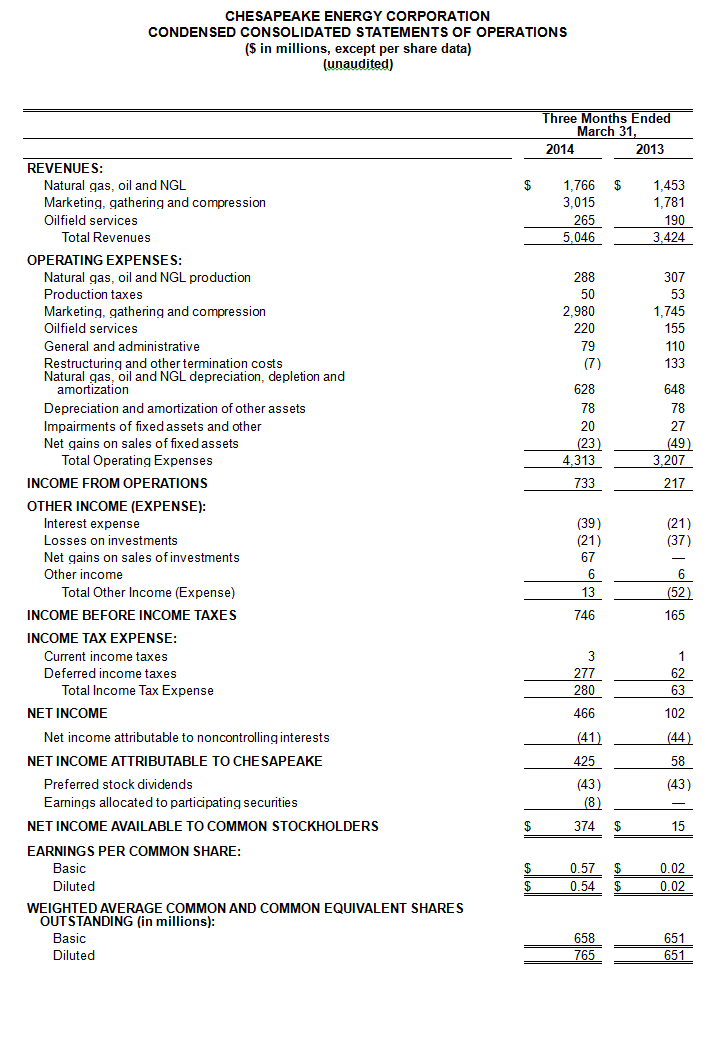 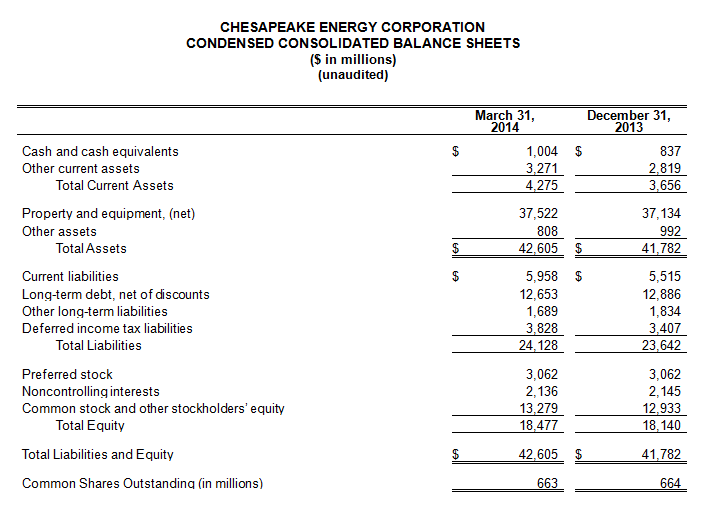 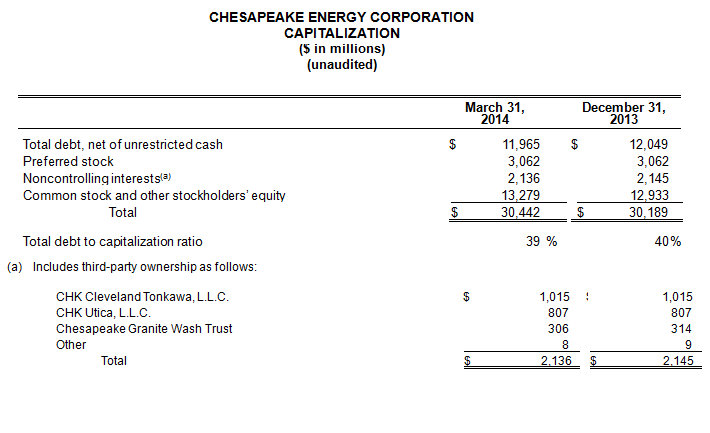 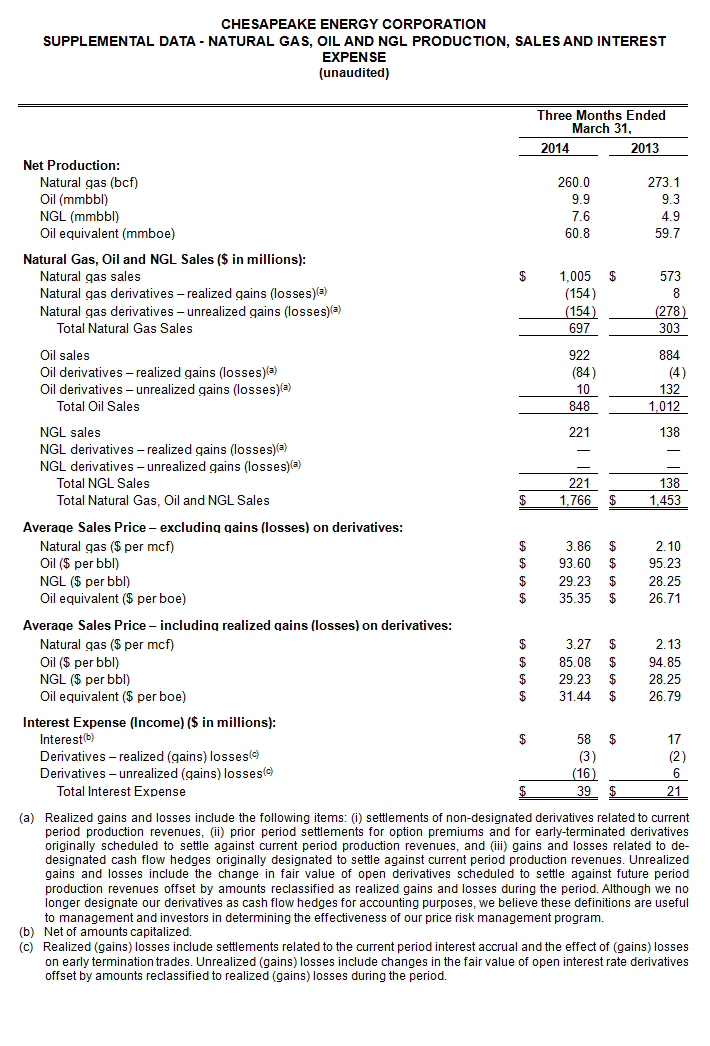 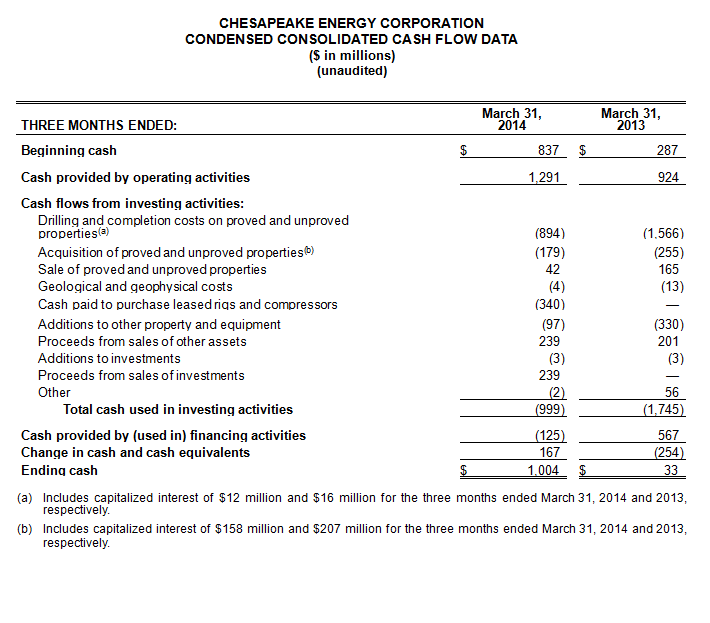 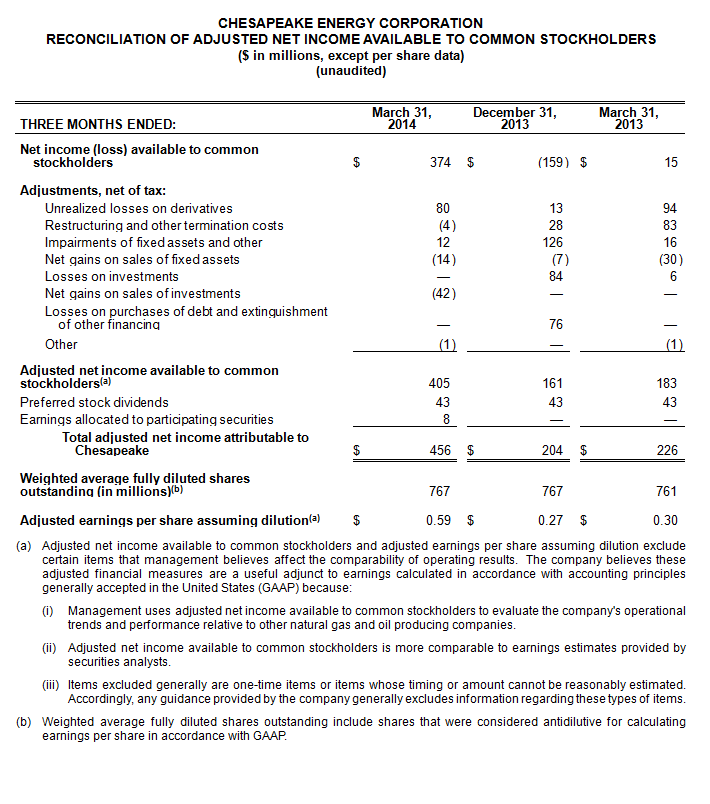 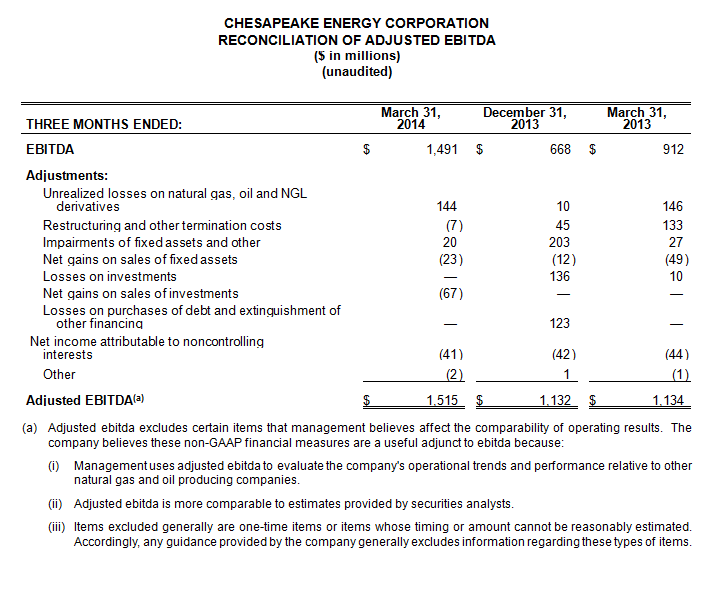 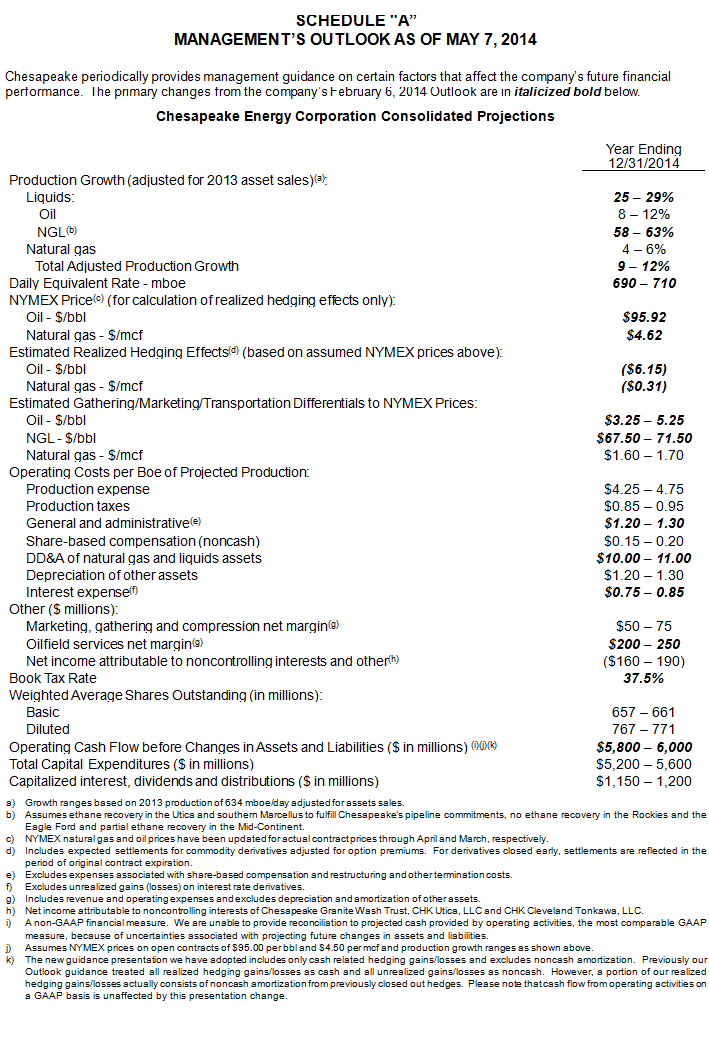 Chesapeake enters into natural gas, oil and NGL derivative transactions in order to mitigate a portion of its exposure to adverse changes in market prices. Please see the quarterly reports on Form 10-Q and annual reports on Form 10-K filed by Chesapeake with the SEC for detailed information about derivative instruments the company uses, its quarter-end and year-end derivative positions and accounting for natural gas, oil and NGL derivatives.

The company’s natural gas hedging positions as of May 1, 2014 were as follows: 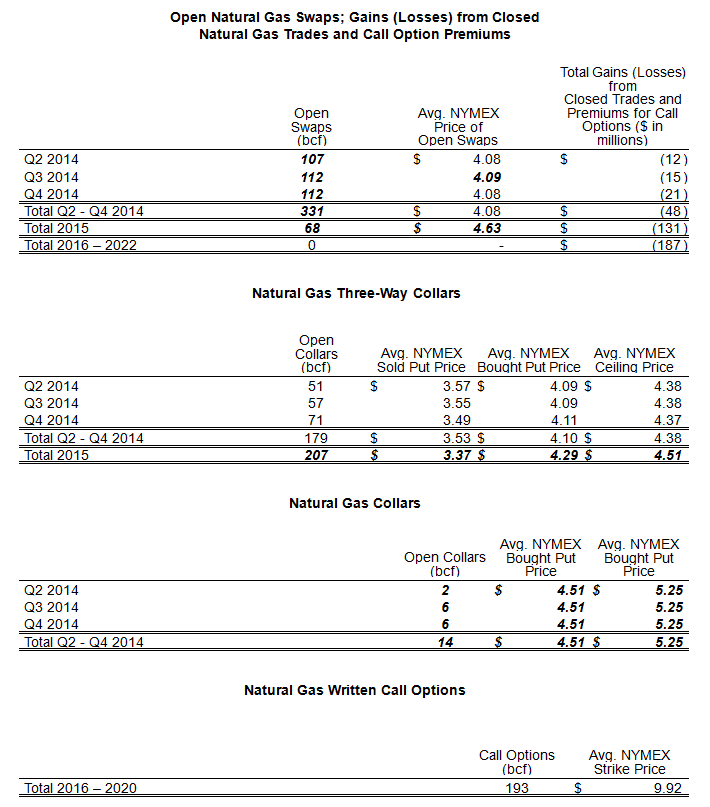 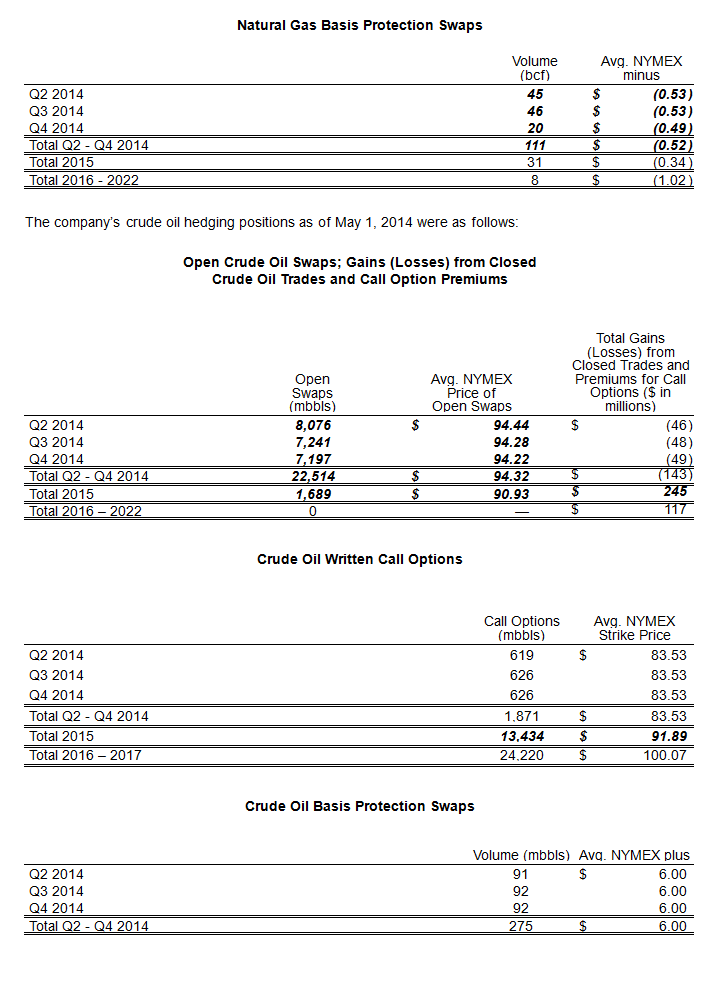