Chesapeake reported net income available to common stockholders of $457 million, or $0.66 per fully diluted share. These results include the effects of the following after-tax items:

The company reported adjusted ebitda of $1.424 billion, an increase of 77% year over year. Operating cash flow, which is cash flow provided by operating activities before changes in assets and liabilities, was $1.370 billion, an increase of 53% year over year. Additional definitions and reconciliations to comparable financial measures calculated in accordance with generally accepted accounting principles of adjusted net income available to common stockholders, operating cash flow, ebitda and adjusted ebitda are provided on pages 12 - 16 of this release.

Doug Lawler, Chesapeake’s Chief Executive Officer, said, “Chesapeake reported a strong quarter operationally and financially. I am very excited and energized by what I have seen during my first six weeks with the company. Chesapeake has an exceptionally broad and deep asset base, which offers tremendous opportunity for value creation. A comprehensive companywide review of our capital allocation and other processes is underway and I believe these initiatives will result in substantial further improvement in both near-term and long-term capital efficiency and returns.”

Steve Dixon, Chesapeake’s Chief Operating Officer, commented, “We are raising our full-year 2013 oil production guidance by 1 million barrels (mmbbls) to 38 – 40 mmbbls, representing a growth rate of 22 to 28% year over year, due to good well performance,an accelerated pace of well completions in the Eagle Ford Shale and timing of asset sales. We are also reducing our 2013 NGL production guidance by 2 mmbbls to 21 – 23 mmbbls to reflect ethane rejection that occurred during the second quarter and thus far in the third quarter as well as anticipated delays associated with third-party gathering, compression and processing in the Utica Shale.”

During the second half of 2013, Chesapeake plans to operate an average of 64 rigs compared to an average of 81 rigs during the first half of the year. The company also plans to complete approximately 20% fewer wells in the second half of 2013 compared to the first half of the year. Based on these planned activity levels, the company is reducing its 2013 full-year guidance for drilling and completion costs from a range of $5.75 – $6.25 billion to $5.7 – $6.0 billion.

Chesapeake continues to make significant progress in selling noncore assets. During the first half of 2013, the company received proceeds of approximately $2.4 billion from asset sales. During the 2013 third quarter to date, the company has completed sales of additional assets in the Haynesville Shale and Eagle Ford Shale to subsidiaries of EXCO Resources, Inc. (NYSE:XCO) for total consideration of approximately $1.0 billion (inclusive of approximately $100 million that is subject to customary post-closing contingencies) and expects to complete today the sale of midstream assets in the Mississippi Lime play to SemGroup Corporation (NYSE:SEMG) for total consideration of approximately $300 million. Chesapeake is also pursuing several other transactions of varying sizes that may reach completion before the end of 2013.

The company continues to achieve strong operational results in its most active plays, as highlighted below.

Chesapeake is currently operating 15 rigs in the Eagle Ford and, due to reduced cycle times and the sale discussed above, plans to reduce its operated rig count to 10 by the end of 2013. Average spud-to-spud cycle time during the quarter was 16 days, down from 21 days year over year. As of June 30, 2013, Chesapeake had drilled a total of 963 wells in the Eagle Ford, which included 795 producing wells, 24 additional wells waiting on pipeline connection and 144 wells in various stages of completion.

Utica Shale (eastern Ohio, Pennsylvania, West Virginia): Net production from the Utica Shale play averaged approximately 85 million cubic feet of natural gas equivalent (mmcfe) per day during the 2013 second quarter, an increase of 48% sequentially from the 2013 first quarter. The average peak daily production rate of the 42 wells that commenced first production in the Utica during the 2013 second quarter was approximately 6.6 mmcfe per day.

Chesapeake is currently operating 11 rigs in the Utica, which it plans to reduce to 10 rigs by year end. Average spud-to-spud cycle time during the quarter was 18 days, down from 26 days a year ago. As of June 30, 2013, Chesapeake had drilled a total of 321 wells in the Utica, which included 106 producing wells, 93 additional wells waiting on pipeline connection and 122 wells in various stages of completion.

Chesapeake is currently operating 26 rigs across these plays, which it plans to reduce to 19 rigs by year end. As of June 30, 2013, the company had an inventory of 58 drilled but uncompleted and/or unconnected wells in the Greater Anadarko Basin.

Chesapeake is currently operating five rigs in the northern dry-gas portion of the play and anticipates maintaining this activity level for the remainder of 2013. Average spud-to-spud cycle time during the 2013 second quarter was 29 days, down from 31 days a year ago. As of June 30, 2013, Chesapeake had an inventory of 144 drilled but uncompleted and/or unconnected wells in the northern Marcellus. 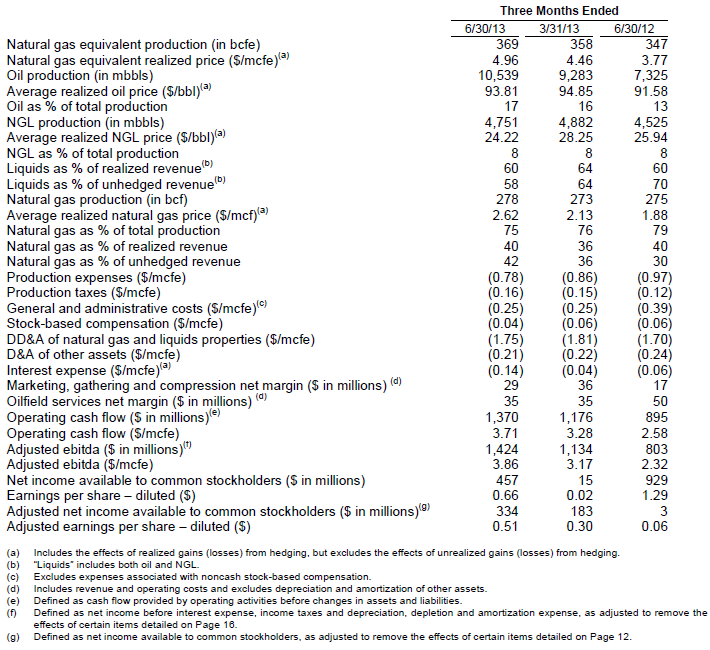 This news release and the accompanying Outlooks include “forward-looking statements” within the meaning of Section 27A of the Securities Act of 1933 and Section 21E of the Securities Exchange Act of 1934. Forward-looking statements are statements other than statements of historical fact that give our current expectations or forecasts of future events. They include production forecasts, estimates of operating costs, planned development drilling, expected capital expenditures, anticipated asset sales, projected cash flow and liquidity, business strategy and other plans and objectives for future operations. Although we believe the expectations and forecasts reflected in the forward-looking statements are reasonable, we can give no assurance they will prove to have been correct. They can be affected by inaccurate assumptions or by known or unknown risks and uncertainties.

Factors that could cause actual results to differ materially from expected results are described under “Risk Factors” in Item 1A of our 2012 annual report on Form 10-K filed with the U.S. Securities and Exchange Commission on March 1, 2013. These risk factors include the volatility of natural gas, oil and NGL prices; the limitations our level of indebtedness may have on our financial flexibility; declines in the prices of natural gas and oil potentially resulting in a write-down of our asset carrying values; the availability of capital on an economic basis, including through planned asset sales, to fund reserve replacement costs; our ability to replace reserves and sustain production; uncertainties inherent in estimating quantities of natural gas, oil and NGL reserves and projecting future rates of production and the amount and timing of development expenditures; our ability to generate profits or achieve targeted results in drilling and well operations; leasehold terms expiring before production can be established; hedging activities resulting in lower prices realized on natural gas, oil and NGL sales; the need to secure hedging liabilities and the inability of hedging counterparties to satisfy their obligations; drilling and operating risks, including potential environmental liabilities; legislative and regulatory changes adversely affecting our industry and our business, including initiatives related to hydraulic fracturing, air emissions and endangered species; current worldwide economic uncertainty which may have a material adverse effect on our results of operations, liquidity and financial condition; oilfield services shortages, gathering system and transportation capacity constraints and various transportation interruptions that could adversely affect our revenues and cash flow; losses possible from pending or future litigation and regulatory investigations; cyber attacks adversely impacting our operations; and the loss of key operational personnel or inability to maintain our corporate culture. In addition, disclosures concerning the estimated contribution of derivative contracts to our future results of operations are based upon market information as of a specific date. These market prices are subject to significant volatility. Our production forecasts are also dependent upon many assumptions, including estimates of production decline rates from existing wells and the outcome of future drilling activity. We do not have binding agreements for all of our planned 2013 asset sales. Our ability to consummate each of these transactions is subject to changes in market conditions and other factors. We caution you not to place undue reliance on our forward-looking statements, which speak only as of the date of this news release, and we undertake no obligation to update this information. 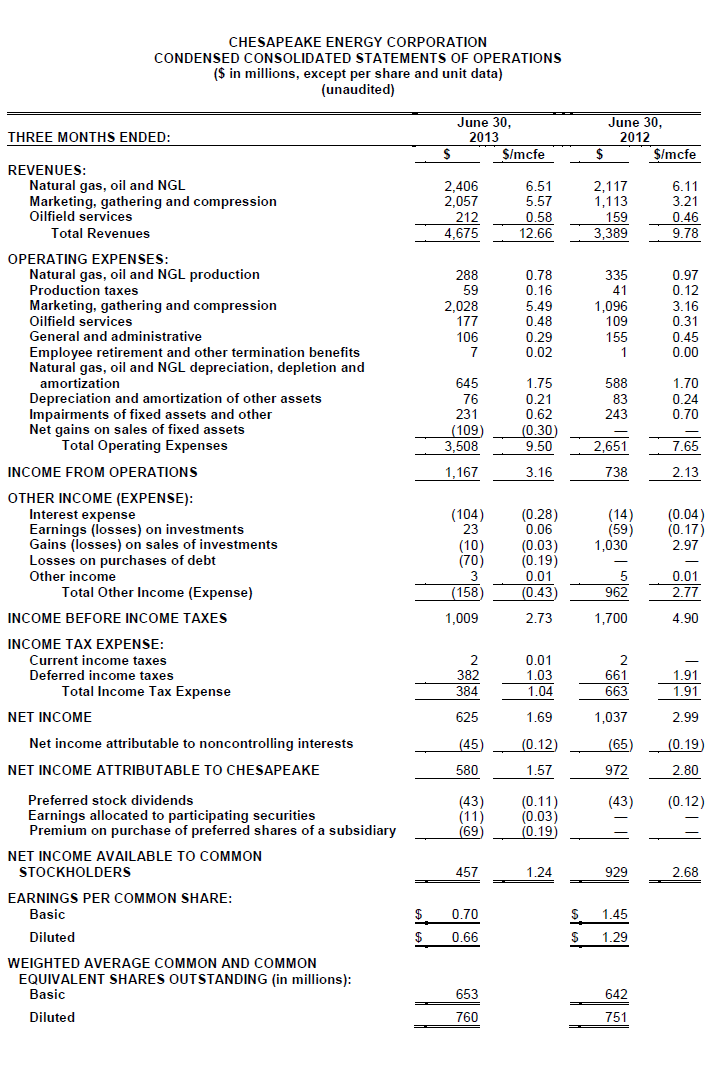 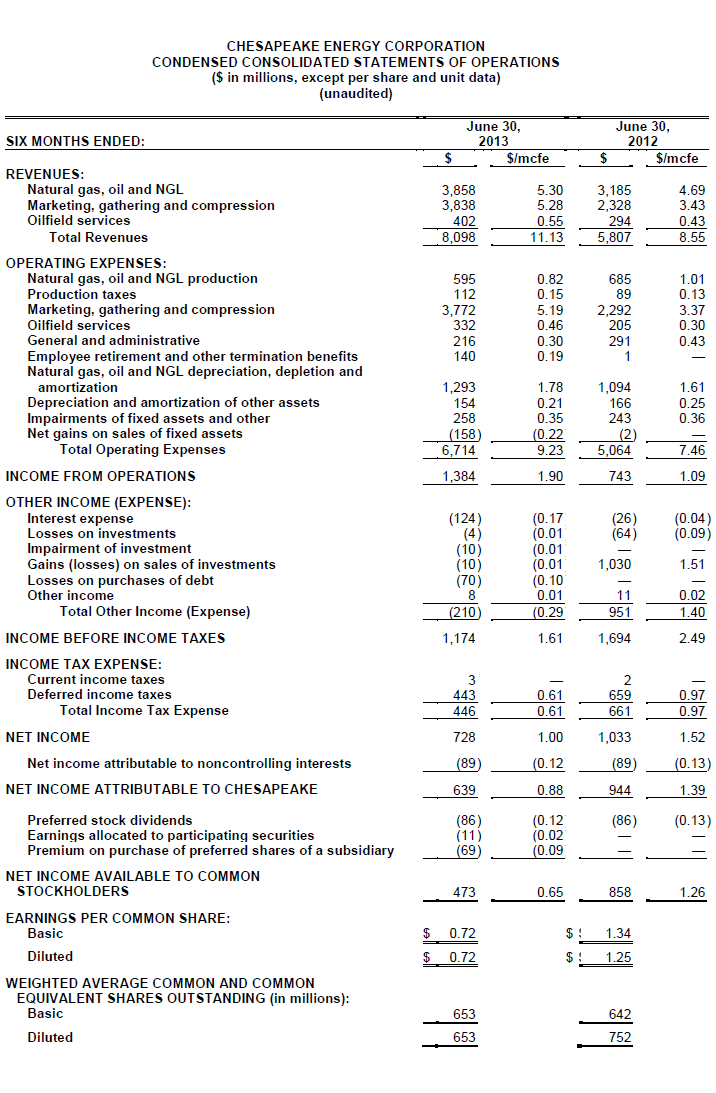 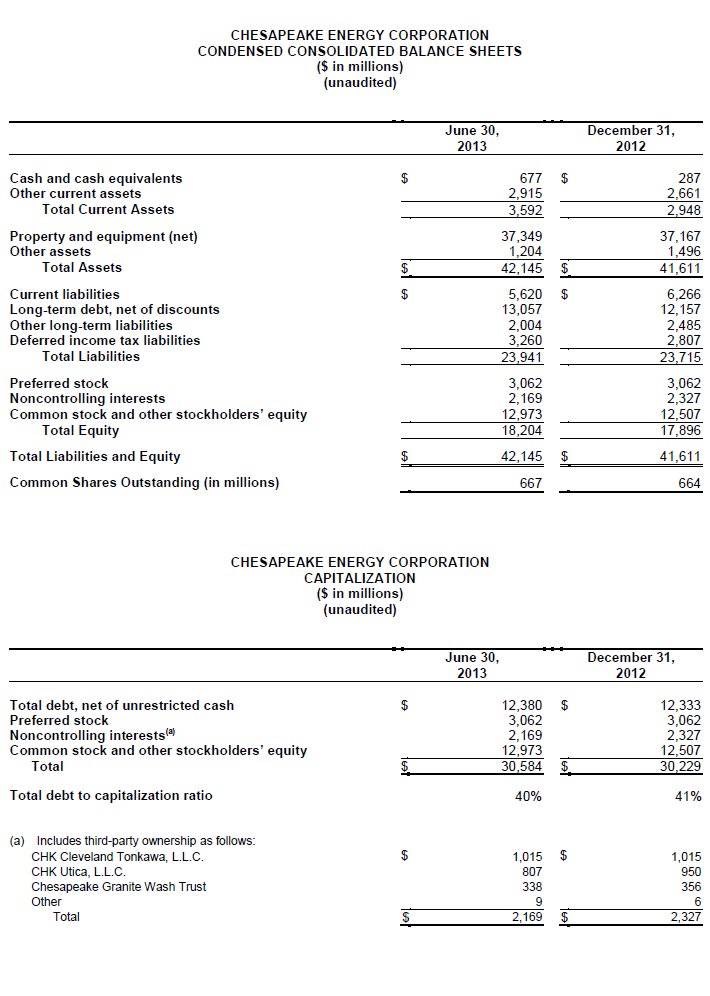 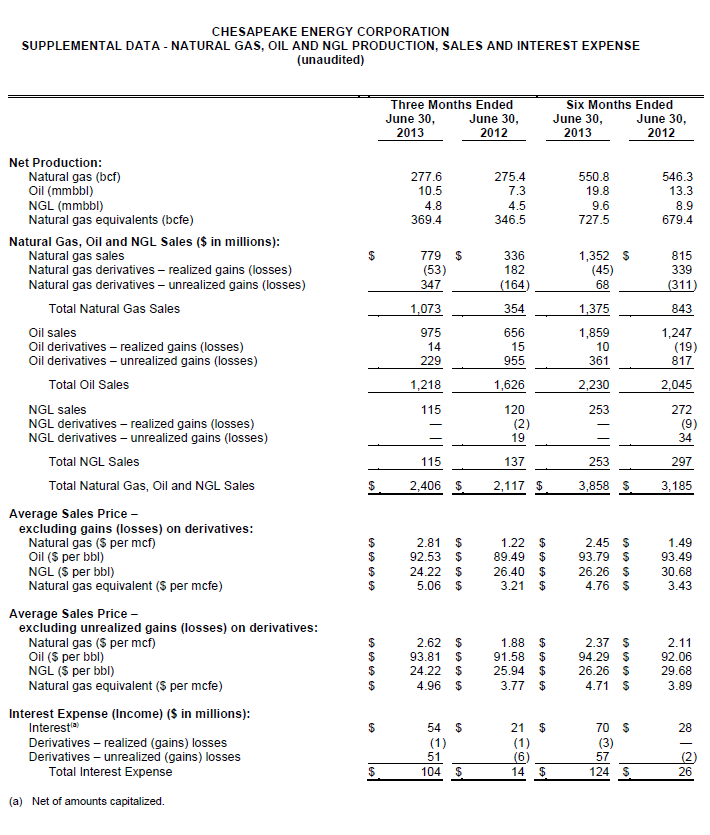 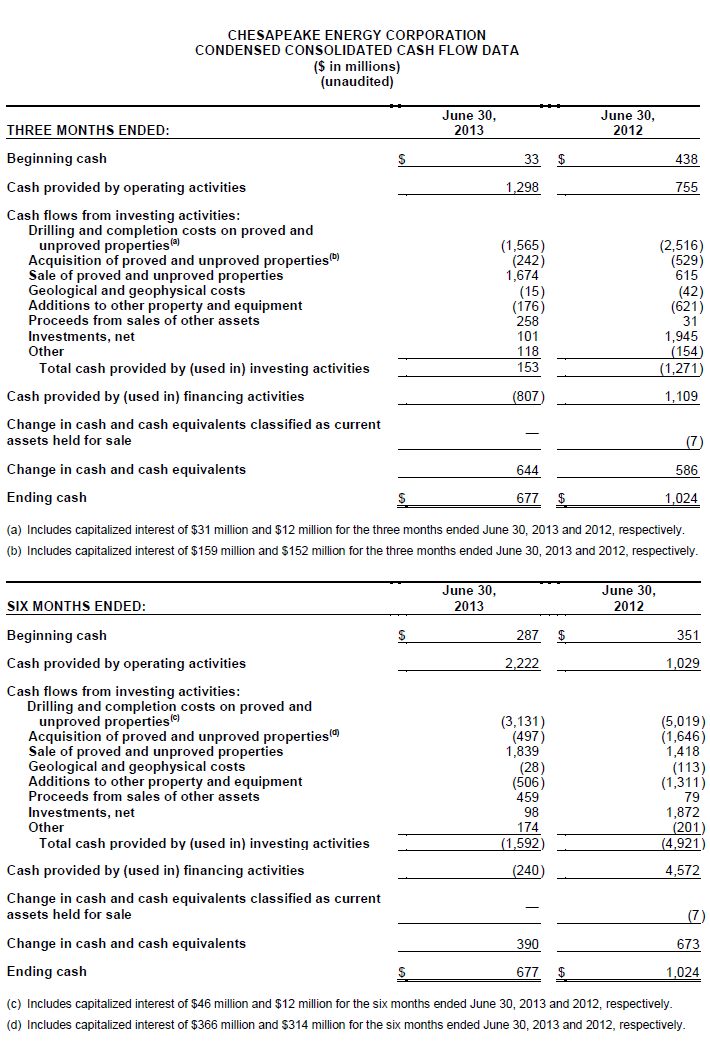 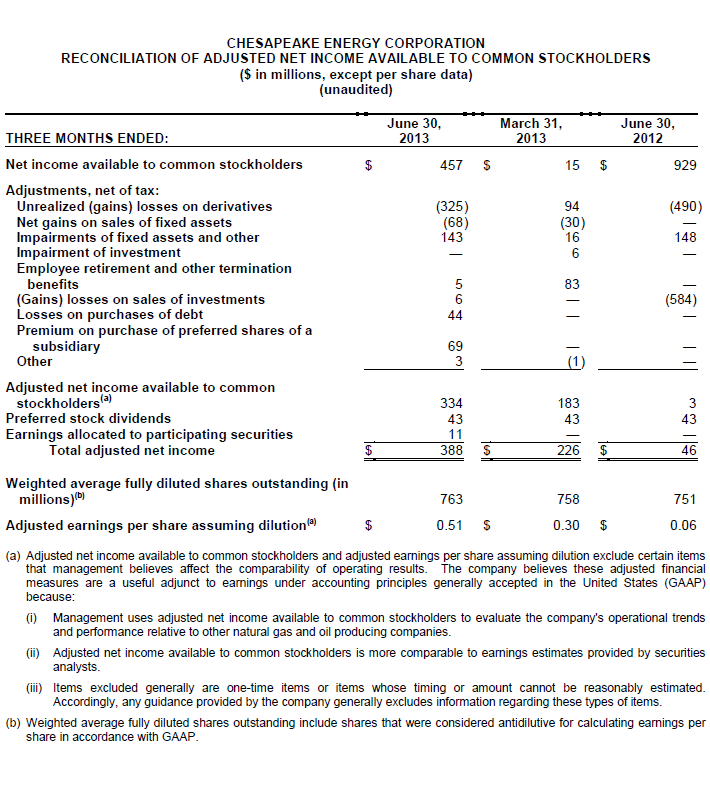 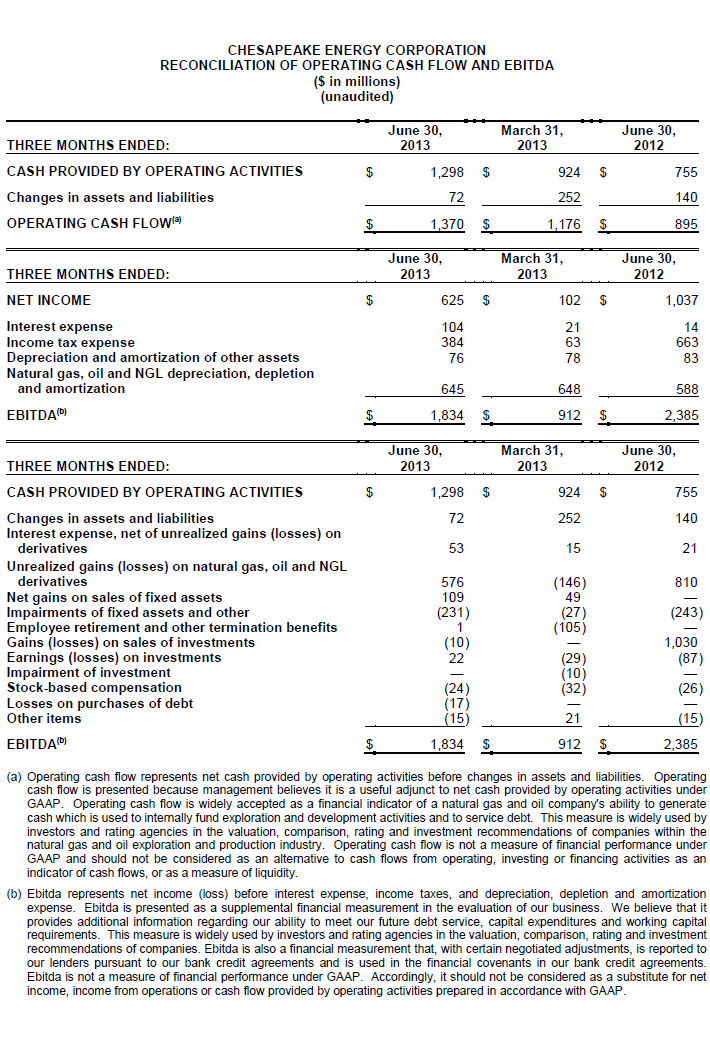 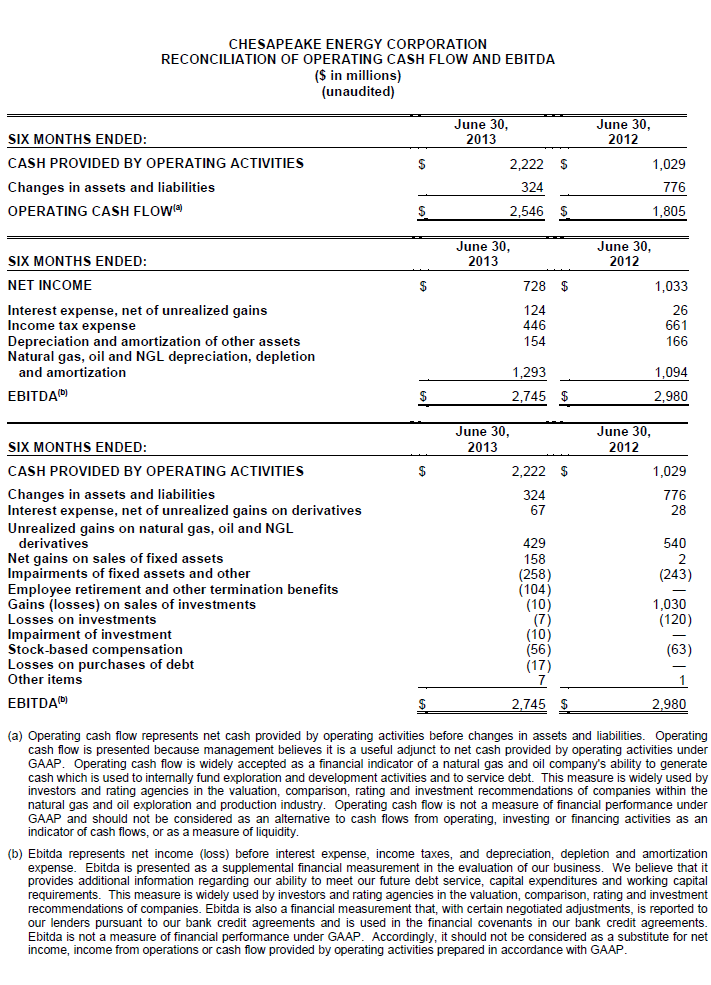 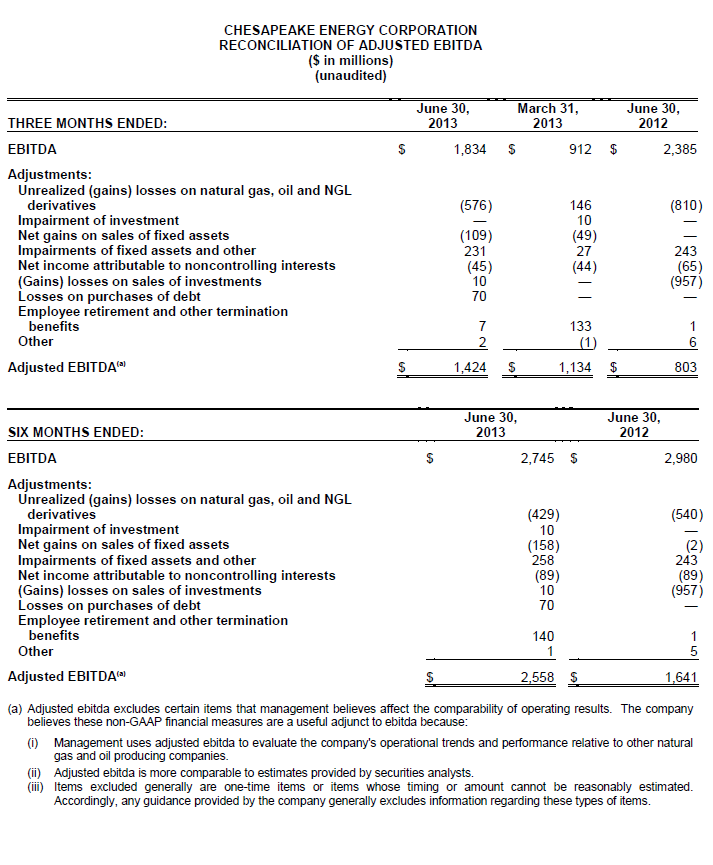 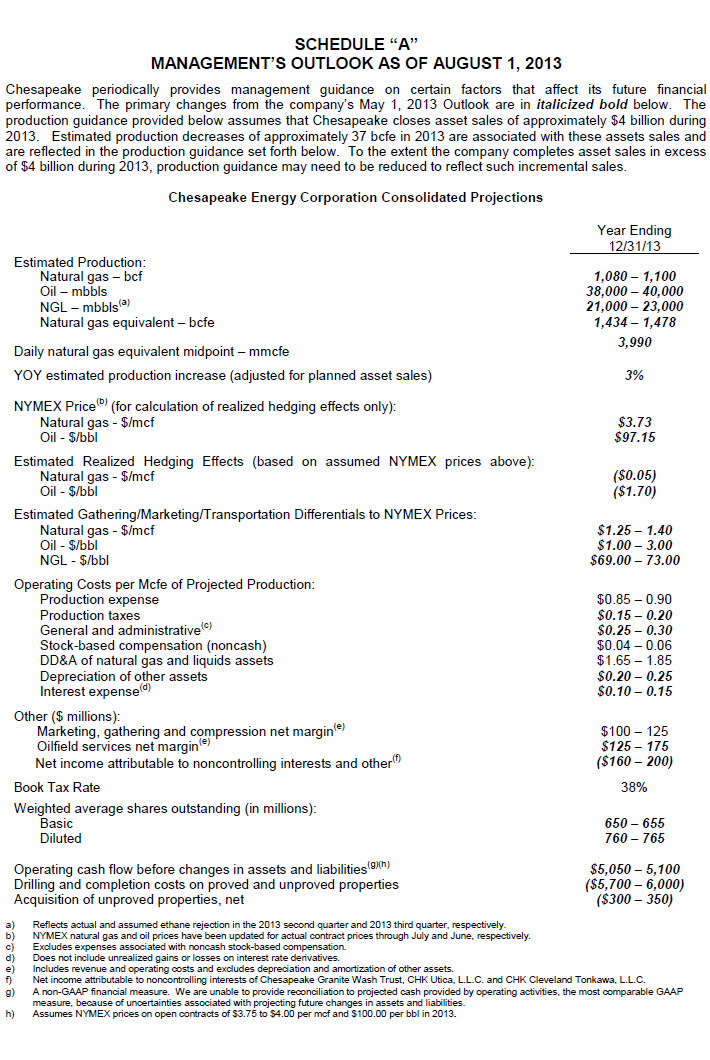 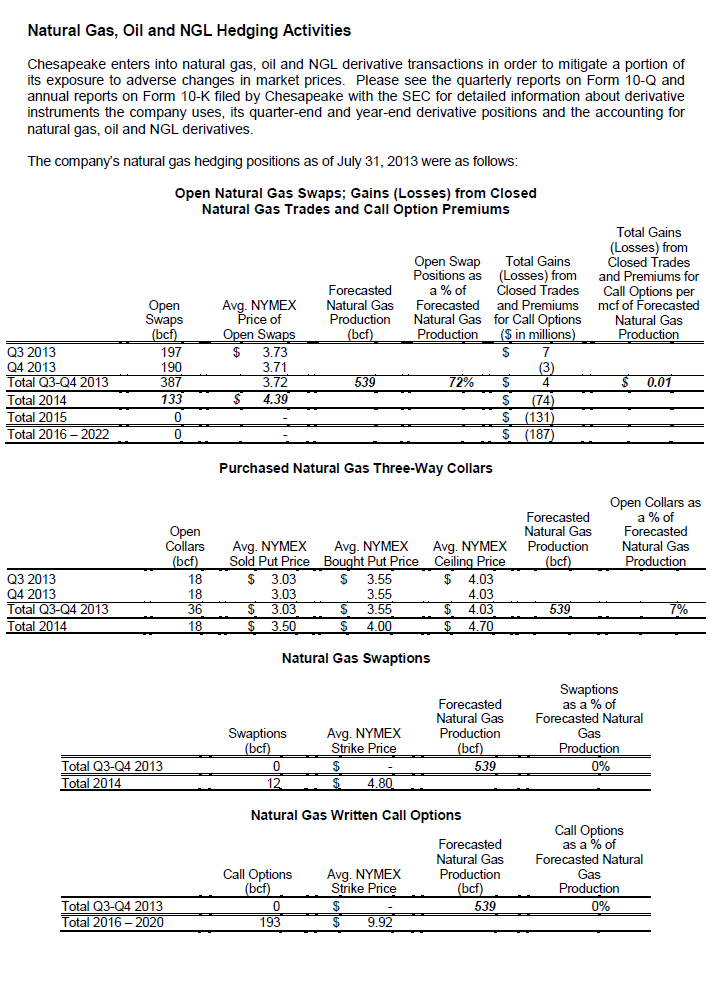 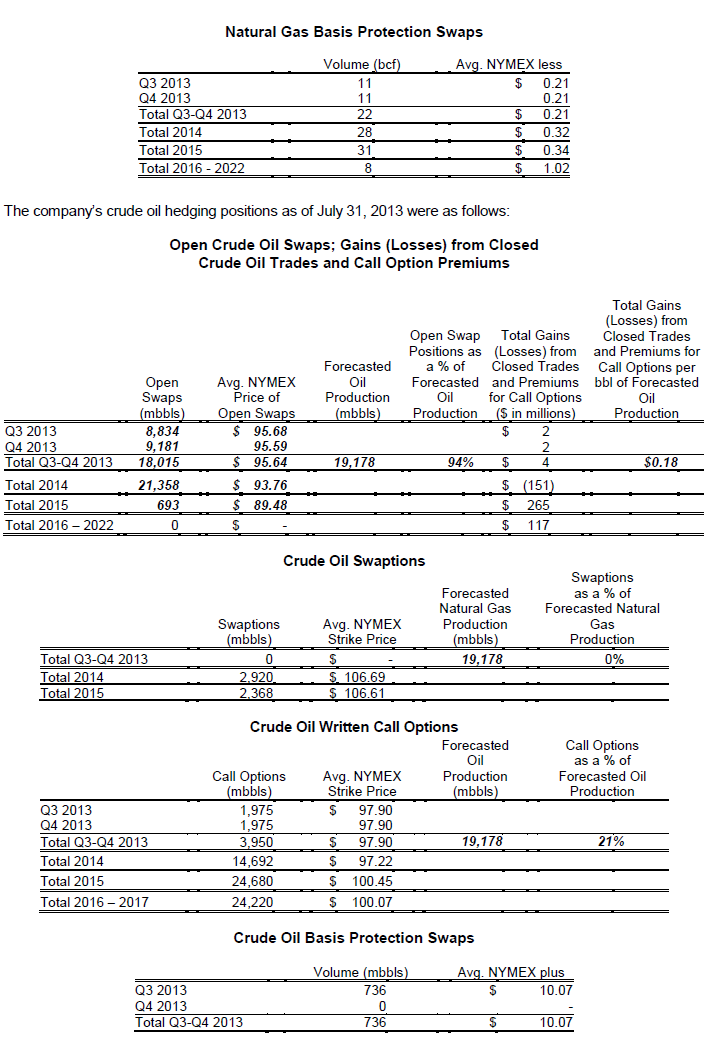