OKLAHOMA CITY, OKLAHOMA, NOVEMBER 9, 2010 – Chesapeake Midstream Partners, L.P. (NYSE:CHKM) today announced financial results for the 2010 third quarter. Net income for the quarter totaled $33.4 million and adjusted ebitda (defined on page 3 of this release) was $58.9 million. Distributable cash flow (“DCF”) (defined on page 4 of this release) totaled $40.0 million and adjusted distributable cash flow (DCF inclusive of the quarterly impact of a contractual minimum volume commitment that will not be recognized until the 2010 fourth quarter) was $56.4 million (see calculation on page 8 of this release).

Total throughput for the 2010 third quarter was 145.7 billion cubic feet (bcf) of natural gas or 1,584 million cubic feet (mmcf) of natural gas per day, a decrease of 2% from 2010 second quarter throughput of 1,624 mmcf per day. The decrease in throughput resulted from the temporary shut-in of a number of high-volume wells by Chesapeake Energy Corporation (“Chesapeake”) (NYSE:CHK) in the Barnett Shale while drilling occurred on shared pad sites.

On August 3, 2010, the Partnership completed its initial public offering of common units at $21.00 per unit. Common units held by public security holders represent approximately 17.7% of all outstanding limited partner units. The Partnership received net offering proceeds of $412.6 million and used $110.0 million to repay its outstanding credit facility balance and paid fees related to the amendment of such facility totaling $5.1 million. The Partnership expects to use a substantial majority of the remaining net offering proceeds to fund expansion capital expenditures and acquisitions.

J. Mike Stice, Chesapeake Midstream Partners’ Chief Executive Officer, commented, “We are pleased to report our 2010 third quarter financial results. This is the first time we have been able to report post-IPO activity. Well connect performance is up significantly versus second quarter, capex spending is beginning to increase and our financial results are consistent with our expectations outlined during our IPO. We are happy to begin paying our quarterly distributions and look forward to executing a business model we feel is ‘best in class.’ ”

A conference call to discuss this release of financial results has been scheduled for Wednesday morning, November 10, 2010, at 9:00 a.m. EST. The telephone number to access the conference call is 719-457-2633 or toll-free 888-312-3047. The passcode for the call is 6826428. We encourage those who would like to participate in the call to dial the access number between 8:50 and 9:00 a.m. EST. For those unable to participate in the conference call, a replay will be available for audio playback from 12:00 p.m. EST on November 10, 2010 through 12:00 p.m. EST on November 24, 2010. The number to access the conference call replay is 719-457-0820 or toll-free 888-203-1112. The passcode for the replay is 6826428. The conference call will also be webcast live on the Internet and can be accessed by going to the Partnership’s website at www.chkm.com in the "Events" subsection of the "Investors" section of the website. An archive of the conference call webcast will also be available on the website.

Use of Non-GAAP Financial Measures

Adjusted Ebitda. The Partnership defines adjusted ebitda as net income (loss) before income tax expense, interest expense, depreciation and amortization expense and certain other items management believes affect the comparability of operating results. Adjusted ebitda is a non-GAAP financial measure that management and external users of our consolidated financial statements, such as industry analysts, investors, lenders and rating agencies, may use to assess:

Management believes it is appropriate to exclude certain items from ebitda because management believes these items affect the comparability of operating results. The Partnership believes that the presentation of adjusted ebitda in this press release provides information useful to investors in assessing its financial condition and results of operations. The GAAP measure most directly comparable to adjusted ebitda is net income.

This press release includes forward-looking statements. Forward-looking statements give our current expectations or forecasts of future events. They include but are not limited to throughput volumes, revenues, net income, adjusted ebitda and distributable cash flow, as well as other statements concerning our business strategy and plans and objectives for future operations. We caution you not to place undue reliance on our forward-looking statements, which speak only as of the date of this release, and we undertake no obligations to update this information. Although we believe the expectations and forecasts reflected in these and other forward-looking statements are reasonable, we can give no assurance they will prove to be correct. They can be affected by inaccurate assumptions or by known or unknown risks and uncertainties. Factors that could cause actual results to differ materially from expected results are described under “Risk Factors” in our prospectus dated July 28, 2010 and filed with the Securities Exchange Commission on July 30, 2010.

Chesapeake Midstream Partners, L.P. is one of the industry’s largest midstream master limited partnerships and owns, operates, develops and acquires natural gas gathering systems and other midstream energy assets. Headquartered in Oklahoma City, the Partnership's operations are focused on the Barnett Shale and Mid-Continent regions of the U.S. Further information is available at www.chkm.com. 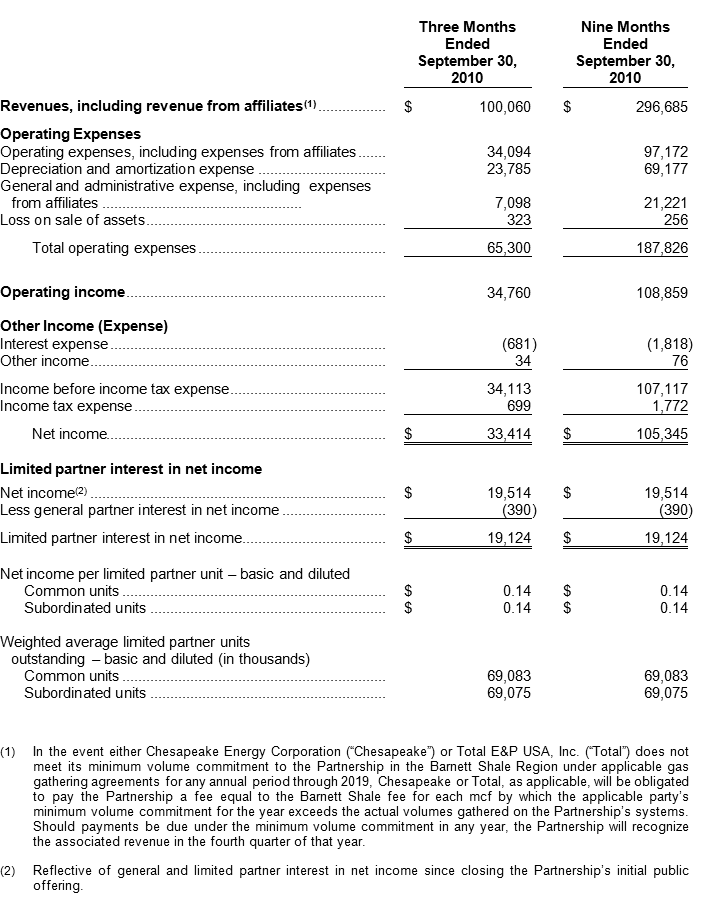 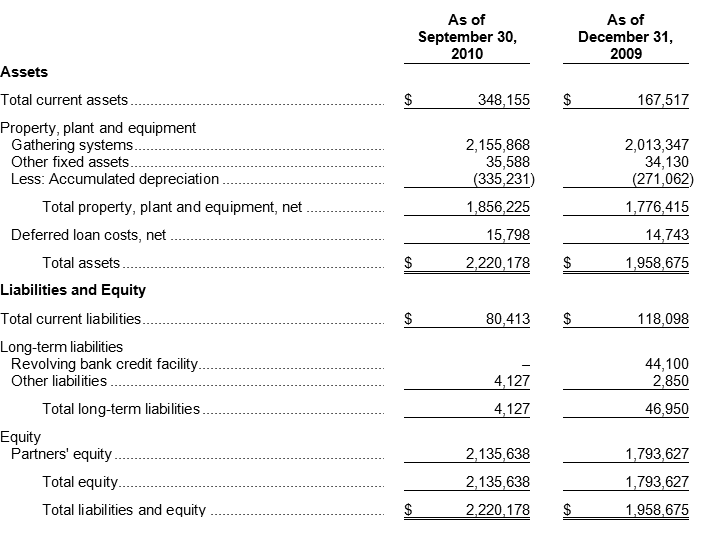 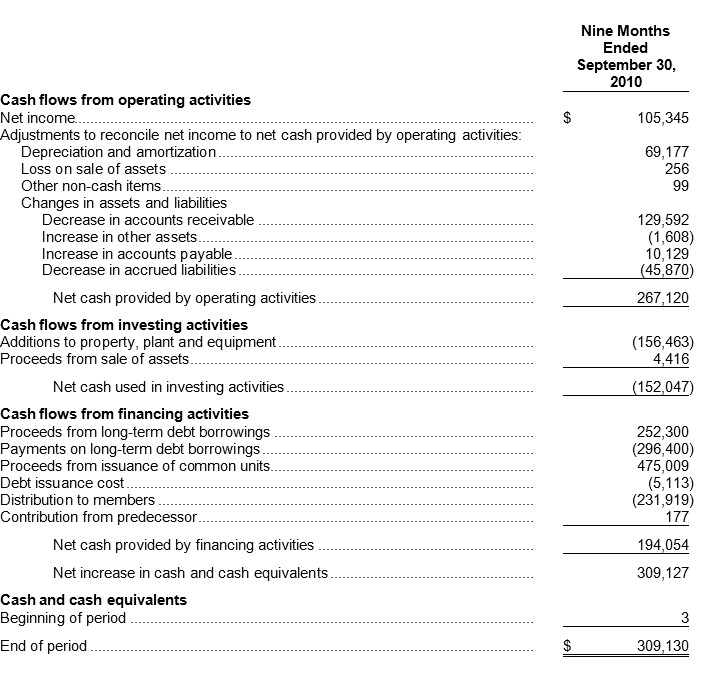 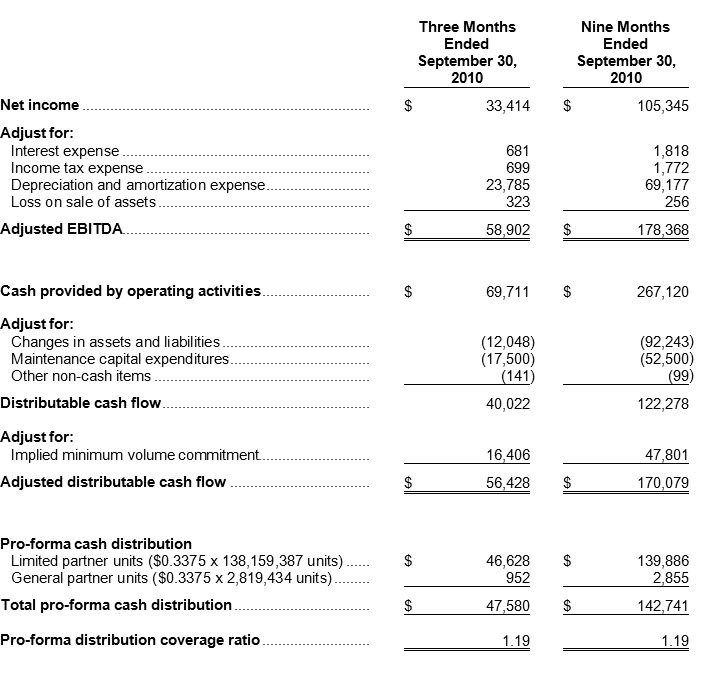 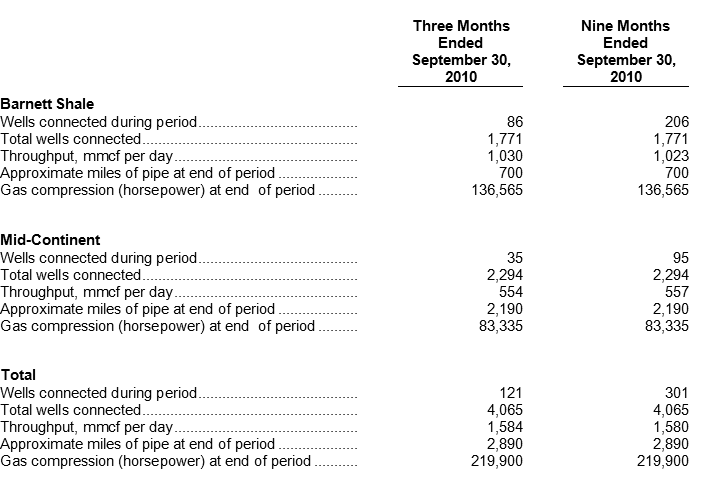